Why use HARD pastels?

there are HARD PASTELS and there are  SOFT PASTELS.  The word "hard" when applied to chalk pastels seems a little strange...since the best quality chalk pastels are known for their velvety-ness, their speed and ease of application because of their softness.

Having said that.......the most expensive pastels in the world - Roche pastels, made in Paris, used extensively by Degas and many of his contemporaries, are relatively hard, particularly when compared to many of the other top manufacturer's pastels.
I have always found this curious.  I have tried Roche pastels, and did not get on that well with them, because of their grittiness...but then I read that when Degas used these pastels, he would build up his work in layers, using fixative between the layers, and the grittiness of the pastel worked to his advantage because each layer had, if you like, its own "tooth" to grab subsequent layers.  He would allow the underneath layers to show through upper layers, so that a fine "web" of colour, sparkling with interest, would be the end result. This seems to make sense. You can just about see this, particularly top left here..but this is really too small to see properly...do take a look at some really good, large reproductions of his works.

In my early years of working with pastels, I worked almost exclusively with the softest pastels I could find, from beginning to end of a painting. I have a fairly light touch - but even so,  I was limited to only a layer or two - perhaps three -  before the tooth of the paper began to fill .  In recent years I have started to use hard pastels in the early stages of a painting, liking the fact that working with the hard pastels, which release less chalky pigment onto the surface, means that I can create initial passages of colour which will then work really well underneath subsequent layers of softer pastels.

However, one of the reasons I rather avoided them originally was because of their harsh, unsubtle colours - most hard pastels on the market were garish in the extreme. Not surprising perhaps when the largest range of hard pastels was - and still is -  in the region of about 70  colours, whereas some of the soft pastel manufacturers offered as many as 500 different colours and tones.

I recently purchased a box of 72 CRETACOLOUR CARRE pastels, because of the really lovely subtle colours in the set.  In particular, the range of greys, which offers me a superb group of warm and cool neutrals.  Take a look: 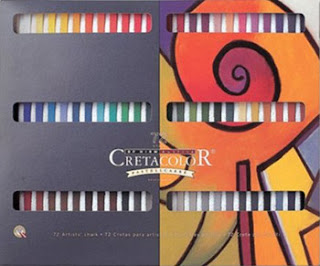 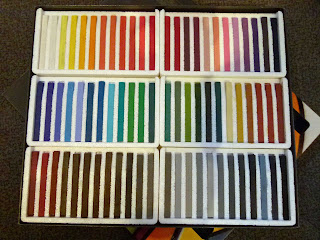 That bottom row of greys, plus many of the others in the box, delighted me, after many years of working solely with bright colours, with perhaps one grey in the set. ( It may be that some of the US makes of hard pastels have a greater colour range than we have here in the UK, and I may not be offering my US readers useful info.  sorry!  All I would say is...look out for the manufacturers who will offer you a good range of greys, they are so useful)  For those of you in the UK - Jacksons (on line) are currently offering this particular set above at a fab discount - they are amazingly good value.

Hard pastels also come in pencil form and I know many people like those, but I personally find that continuously having to sharpen pastel pencils -they wear down quickly - drives me NUTS, they break so darn often, I prefer, every time, to use the "sharp edge" of one of these little beauties! Linear drawing, too, as opposed to painting, with these sticks of almost pure pigment, is a joy, offering such freedom from the constraints of a wooden surround!

Hard pastels are less expensive than soft ones, so adding a box of hard pastels to your studio will not hurt your pocket so much.

A hard pastel can also be used to "soften" edges in places in an image where you have used soft pastels;  the hard pastel will "score" into the soft rather than sit on top, this can be useful to break up the look of a very hard edge.
If you have not tried hard pastels, thinking they are the "poor relation" to soft pastels,  I suggest you give it a go, you may be pleasantly surprised by the results.