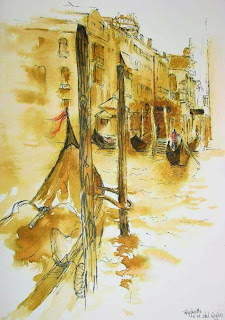 So.........what to USE in a sketchbook?  The answer is, just about anything.....pencils, coloured and plain, graphite, conte and pastel (dont forget to spray fix!)  ink;  watercolour;  gouache;  watersoluble art pens;  watersoluble coloured pencils; brush pens...............the list is pretty endless, and you need to experiment to find out what suits you best.  I thought I would share one of my favourites (apart from watercolour) with you.


A little while back, I discovered the most gorgeous stuff by accident, as I went out without my watercolours, but did have this little bottle in my kit.  I had had it for ages, and never used it, not even sure why I bought it. In fact, it was enormous fun, so  I eventually did a whole sketchbook - a spiral bound pad of watercolour paper, actually, so that one could then tear out individual sheets and frame if a masterpiece was achieved (! well, gotta live in hope), if not, then at least they stayed clean and safe.  No need to stretch the paper using this method.  The stuff I used is called
DR. PH MARTINS RADIANT WATERCOLOUR, and comes in bottles with a rubber eyedropper thingy at the top.  You can use them direct from the bottle, or can dilute with water.
Here is a pic of the bottle:

I used just one colour - I had  a bottle in my pencil case,  and a dip pen, with nib, you know the kind?  That was for the linear work.  I also had a tiny spray bottle of water with me, and plenty of tissues.
I think the colour is Tobacco Brown.
I love the Prolene retractable brushes when travelling, the lids slip onto the handles, and I particularly like the square-ended brush: 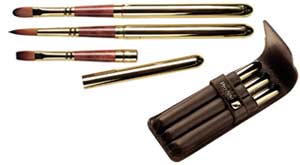 So how did I work?  Well, realising I had left my lovely watercolours back at the appartment, I decided to be brave and try an "ink" sketch. The only "ink" I had with me, apart from rollerball pens which I did not want to use,(lines too regular) was this little bottle of Dr. PH Martins.  I began with a tiny bit of pencil to put things "in position" cos I am always slightly nervous of going straight in with a dip pen.  Then did quite a bit of "drawing" with linear work, dipping the pen straight into the bottle.
Then, I left it to dry -  didn't have to wait long, but I really was not much impressed with all the hard pen lines everywhere, despite using a dip pen which gives you more variety to the lines, it still looked so stiff to my eye, so, always one to experiment, I gave parts of the pic a burst of water with my little spray bottle, just to see what would happen! I had no idea if the stuff was permanent, or might "run" as some inks do.    Wow!!!  Magic!  The lines began to dissolve where the water hit them, and realising what was happening, I quickly put some of the watercolour "ink" into a plastic watercup I had with me, added some water, and with my brushes, I reinforced some of the washes.  See that ripple of water under the pole in the Venice pic?  To do that, I put clear water onto the paper, and dropped some of the Doc Martins into it.  Yummy result!
A tissue can quickly be used to blot areas to stop too much dissolving going on if you want it to stop.
When dry, I found I could then add more, and do it all over again! And as often as i wanted.     If you want fine details towards the end, best to do this on the dry pic.
I loved working in this way, and used it for lots of different images, many of which did get framed, and sold in the end, which I rather regret because they are no longer in my sketchbooks!
Here is another, done on a different trip, and this time I added a few tiny touches of subtle watercolour colours, again, in the spirit of experimentation.  This was done in a small village in France, I called it "One and a half doors"  ! In this one, towards the end, I used the Doc Martins almost neat out of the bottle for the stronger, darker washes.  "Neat" is a good word to use, I like both of its meanings! 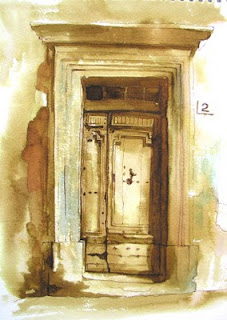 The fab thing about experimenting in a sketchbook is that if you don't like what you do, you dont need to show ANYONE.
More sketchbook info to come!
Posted by jackie simmonds at 05:11