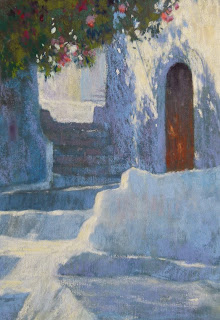 A fellow contributor to WetCanvas recently commented, after watching a clip of my "Painting Gardens" video, that she was relieved to see that we work in a similar way....."locking in" the shadows and the sunlit areas in a scene early on, rather than trying vainly to keep up with or chase the changing patterns and tones created by shifting clouds and intermittent sunlight.


She commented that since we both live in a part of the world where the sun flits in and out, casting shadows one moment, and a few moments later, when it is behind a cloud, there are no shadows at all, we have far more to contend with than those who live in areas with continuous sunshine. However, even for those lucky souls, painting en plein air still means that they have to paint fast if they want to ensure that the shadow shapes they first noticed, remain virtually the same shape and size...particularly in a garden scene, or a street scene like the one here.


So - what to do, if you really want to paint out of doors, and not from a photo  which of course solves the problem by fixing shadows in place for ever! I so enjoyed working outdoors in Greece;  painting this picture back at home, from a 4"x6" photo, could not begin to compare to the adrenalin rush of working from the real scene; I remember the heat, the whitewash (and pastel) dust on my jeans, the passing scruffy stray dog and the skinny cats, the encouraging old lady who shuffled up to see what I was doing, the smell of the foliage, and a little later, the delicious aroma of a lunch being prepared in a nearby house which made my tummy growl,  and the sense of peace, enchantment and joy I felt - it all comes back when I look at this picture.


On an overcast day, you have less problems to deal with, no strong shadows, and clear local colours - this means you may be able to work for a longer time and at a relaxed pace.  BUT  When the sun comes out, you have to work in a totally different way.  You simply have to work faster.  And be very vigilant....when you are absorbed in your painting, you may look up to find that an area, brilliantly lit when you first saw it, is now in deep shadow!  Or vice versa!


1.  Begin with a thumbnail sketch which LOCKS the shadow shapes in place.  Don't spend too long on these sketches - 5 minutes max, to capture the essentials without details, and then you have your sketch to refer to, when the shadows lengthen and change....or disappear for a while

2.   To help yourself work more quickly, scale down and use smaller surfaces than you might otherwise use,  fewer colours, and if you work with a wet medium, use a large paintbrush! Simplify what you see and grab the essence of the scene with confidence and speed.  Being spontaneous can be a good thing, your first impressions should be strong, and will tell the story far more than slow fiddling

3.  When you begin to tackle your picture, put in the shadow shapes FIRST and build the rest of the picture around them.  If you can manage to do as much as possible within 2-3 hours at most, the changing angle of the sun, or a passing annoying cloud or two, should be something you can cope with.

4. Do not try to work through the morning, and on into the afternoon, on the same painting.  The light will appear to come from all sorts of different directions if you do this.  I have watched students do this, on painting holidays...the reluctance to begin a second painting before the first one is finished, is enormous...but it is so much better to return to your morning image, the next morning...and tackle an afternoon image only in the afternoon.


These are just a few basic suggestions.  You also have to bear in mind that bright sunlight on your scene will illuminate what it touches, and all the tone values in the scene will be quite different when the sun disappears behind a cloud.

5.  You have to decide which way you want your painting to go...with the sun, or without it, and be consistent with the tone values according to the prevailing light you have decided to use.  If you are determined to paint a sunny scene, then STOP PAINTING whenever the sun disappears.  You will simply be painting the wrong tones, and the painting will never look right.


I cannot show you, with images, how to work fast!  This is a matter of practice, and discipline. Set yourself time limits, even use a buzzer or timer if you have to, to stop yourself from fiddling - this really works. I will simply say that my method is always to begin with a thumbnail sketch, sometimes pencil, sometimes simple watercolours, I squint to capture the main shapes within the rectangle, and work very fast into a sketchbook, just a tiny image no bigger than 2-3". Then, for my main picture, I stick to the shadow shapes I found in my thumbnail.  Here is a thumbnail sketch - 2-3 minutes at the most, if that - no details, only main light and dark shapes -  as you can see, it is very rough but it helped enormously as the sun moved faster than I had expected -it always does, in a street scene like this, you can almost watch the shadows as they gradually change! The painting, which was then completed mostly on the spot, finishing touches added later in the studio, is the one at the top of this post.

Posted by jackie simmonds at 00:32