CROPPING is, arguably, a rather drastic way to "correct" an unsatisfactory image, particularly if you have
finished that picture!  However, finding a new image by cropping can feel very creative, and rather satisfying too, particularly if the picture is bugging you, or doesn't meet the demands of your "inner taskmaster".

Of course, if you had started with a good thumbnail sketch, you probably would never need to resort to such drastic action - but then again, even with the best will in the world, we sometimes find ourselves (I am talking about myself here, I realise.........) dissatisfied and wanting to make changes.

As you can see, I did finish this image, called "Fixing her hair".  But I was never really happy with it. Although I rather liked all the interesting echoing angles within the image,   I just did not like the girls on the right of the picture.    So I have tried a crop.  The resulting image pleases me more, but I still do feel I should have spent more time on my original thumbnail!   It is an image which will never see the light of day.   It is quite fascinating and revealing tho, as an exercise, to see what a crop can achieve and the change it can make to the atmosphere of an image.. 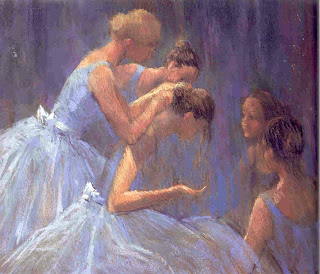 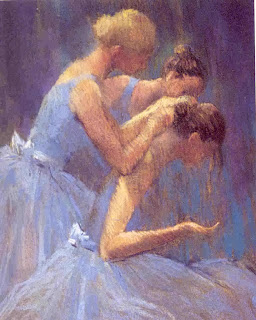 Here is another example.    This time, it involves the use of TRACING.    I had a model at home, did lots of sketches, took photos, and eventually put together this image, as I particularly liked the idea of two dancers together -  so I asked my model to pose in different ways, wearing different dresses.  I composed from my reference material, starting with a rough thumbnail: 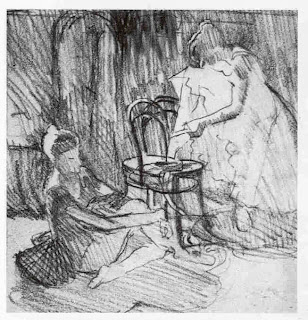 I went on to produce a full-scale painting. 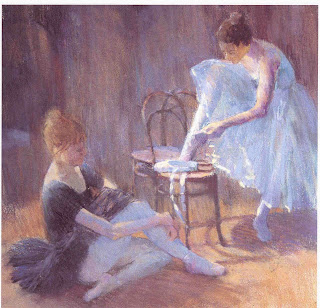 I really did not like it at all.  I kept hoping I would........but I just didn't, I felt it was all WRONG.  I liked some of the elements of counterchange (dark against light, light against dark) and I liked the feeling of light in the image and some of the echoing angles throughout the image, but the girl on the floor bothered me a lot, the drawing wasn't right, the pose stiff, I suspected that two different camera angles didn't help one bit.    There is no connection between the seated and standing dancers.  I had to either bin it, or rescue it.

I tried a rescue.  Since I disliked the girl on the floor so much, I decided to get rid of her.  But to make sure I might like the end result, I decided to use some TRACING PAPER to test a new image.  Cropping alone would have been difficult because of the seated dancer's legs- so I used Schmincke pastel tracing paper- and replaced the seated dancer's legs with chair legs and floor.  I worked over the tracing with colour, cut it out and tried it in situ: 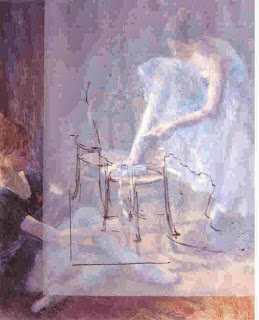 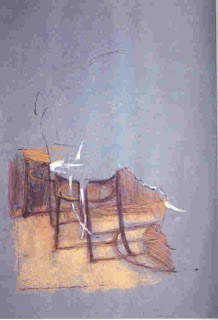 here is the section of the painting, with the tracing paper positioned over the top: 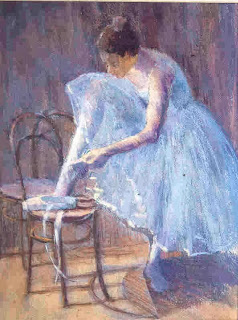 I feel this could possibly make a successful image -  unless I can find a better way to sort out the seated dancer.

And so I tried the tracing paper technique again.  Rather than fiddle with the painting, I tried out a different rescue tactic, changing her head so that she looks up at the standing dancer (I would not crop off the standing dancer's head like this, incidentally).  The result gives, I feel, considerably better emotional content, and therefore could be an alternative "fix". 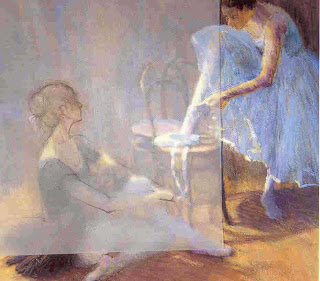 I cannot say that I achieved total satisfaction with either image, to be honest.....but at least I found some options for change.  If you find that you produce some images which just don't feel right, then perhaps it is worth trying out some rescue tactics, to see if you can find alternative images within your first attempt, so that you do not feel you have totally wasted your time.  Sometimes, you will discover a more concentrated, intimate composition, with a good strong balance of shapes and tones, which can be a lovely surprise.

Posted by jackie simmonds at 06:15