Once upon a time, figure drawing was taught from white plaster casts.  This helped the artist to concentrate on the form, without being distracted by colour.  A white figure would provide various tones of greys in the shadows, and the emerging artist would learn to see not just simple white, grey and black, but many subtle nuances of shades of grey - the tones.


I am sure that most artists reading this blog are well aware of the way that light reveals the three-dimensional form of an object. If you have been sharpening up your observational powers really well, you will be aware of the subtleties in the tones - the way that the shadows alter in depth of tone according to the shape of an object.  A white box, for example, will provide obvious changes of tone, related directly to the changes of plane,  when placed near a window.  A cylinder will have much more subtle changes of tone.  My tutor encouraged us students to produce loads of drawings in tone, particularly of things cylindrical, conical and spherical, basic shapes which represent many basic forms in nature.


Light can play tricks however, it can actually destroy the illusion of shape.  How? Well, let's take a look at one dangerous area...CAST SHADOWS.


If you were to draw an object, carefully considering the light and shade, it might look fine.  But what if you were to place another object alongside the first one, so that it casts a shadow across the form of the first object?


Here are two very simple drawings to illustrate the point.  The highlight and shading (tones) on this smooth "red" pepper shows us the form, we understand it completely. 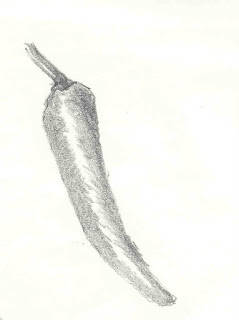 But look at the shadow cast by the garlic below.  Studied in isolation, you can clearly see that the form is now only suggested by the curving shape of the bttom edge of the shadow.  Otherwise, all sense of three dimensions has gone...that particular part of the pepper could be completely flat. 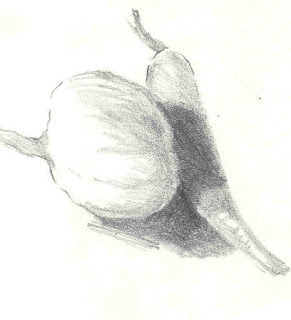 Now squint at the next pic. I have extended the dark shadow to the right of the pepper, and made it similar in tone to the shadow on the pepper - now it looks like there could be a gap between a top section and bottom section of pepper! 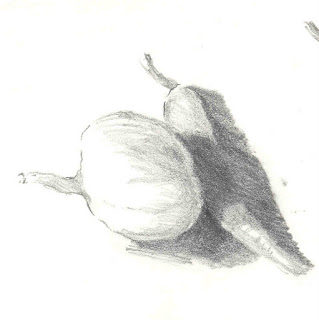 Let me show you why this is important in other cases too.   Light falls onto a human face from above (mostly).  Therefore the nose sometimes casts a shadow below.

If you drew that shadow exactly as you saw it, you would give the face a neat little moustache!  I know you may think I am stating the obvious, but I have actually seen this in many a student's work.  When pointed out to them, I got a frown, and the defensive comment "well, it was THERE, I was only drawing what I saw".
It is sometimes hard to make someone understand that it is, actually,  OK to leave certain things OUT of a picture if they are not helpful.  The determination to paint what is seen, is very powerful. (I once read of a tutor who watched his student very carefully drawing, on the model's chest, the cast shadow of a cat asleep on the skylight above! ) Next time you look at a really good portrait, notice how the artist has either eliminted, or reduced the importance of the cast shadow under the nose.


The head, too, casts a shadow onto the neck, often hiding the column-like form.


Also, and worse still if the model is a woman, the shadow may make the model look like she has a beard!


I freely admit that when I was a student, drawing someone asleep in the sunshine, with shadows from a fence falling across his white t-shirt,  so intent was I upon getting them straight and the right thickness that instead of looking at best like a striped t shirt, it actually looked like a fence had fallen onto the poor chap!


Here's an excellent, if obvious, example of the danger of cast shadows... 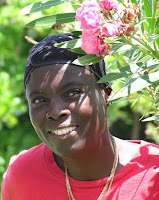 Painted as seen, the result could be quite disturbing, as if the woman has some kind of unfortunate skin complaint or else has been doing some home decorating with something very splashy! 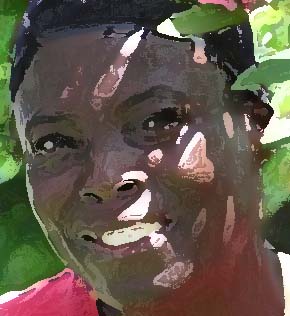 Look at this beautiful drawing by Rubens.  Notice how the shadow cast by the nose has been noticed, but very little is made of it, and also see how the neck is shown to be a column by the careful use of directional shading: 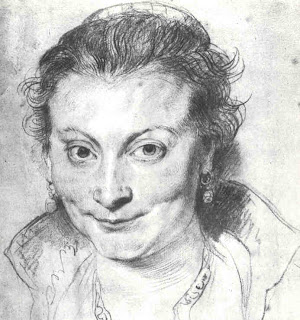 There is a cast shadow on the clothing behind the head...but this helps to frame the face, and emphasises that wonderful reflected light on the side of the face;  it is falling onto the simple flat plane of the raised collar, so does not destroy any feeling of form.


I hope I have made you a little more aware of the danger of faithfully copying cast shadows, and the need for realising that even if "it is there", the artist needs to spot potential problems and deal with them with intelligence and sensitivity.
Posted by jackie simmonds at 04:29