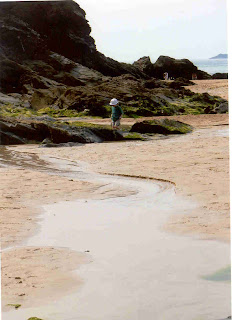 Something recently drew my attention to the fact that the use of the photograph as source material is becoming more and more prevalent.  Even beginners are using photographs, instead of real objects, to sketch from.  Now please don’t misunderstand …I am NOT saying that artists should never work from photos…so anyone who  wants to attack me on this point – please don't, because I do use photos often,and what was good enough for Degas, is ok by me!
So, WHY do I encourage all beginners to work from life, as often as possible, if the camera is an acceptable tool to me?
Well, I believe people use photos not just for convenience but partly because one step in the process has been removed for them.   The photograph is a flat, two-dimensional object.  Somehow, it is easier to “see” the shapes in the photograph as two-dimensional shapes, whereas when confronted with a three-dimensional object or scene, it feels far more difficult to translate from three dimensions to two.  (ALSO the photo has defined boundaries…reality doesn’t.)


However.....working from life not only feels quite different to working from a photo, it also teaches you different things.
Now…stop frowning at me and think for a moment.  You might be able to blow up your photograph so that an apple depicted in a  photo is the same size as an apple placed on a table…but what about the tree you plan to draw?  You could never blow up your photograph to be the same size as a tree!  Doesn’t that make you wonder how much information you might be “missing”, when working from a small photo? 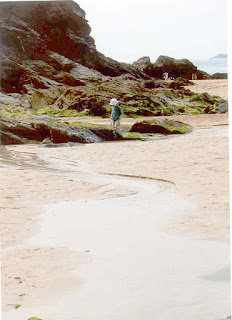 AND, possibly even more importantly,  are you aware of the distortions that occur in photos? In crit sessions, I have so often heard the defensive cry “but that was just how it was in the photo”.  Yet the photo is not always "the truth".  So many things can be inaccurate. For instance, tones – particularly in landscape photos – are often rendered inaccurately because the camera cannot expose correctly for both sunlit areas and shadow areas at the same time. Look at this photo on the right and compare it with the one above:   you will get a sense of what the eye might have seen in those rocks.
Portraits, particularly those taken by amateur photographers, often have unnaturally flattened forms, particularly if flash is used. Proportions are often distorted too.  Just look at the first two pics in this photography tutorial, they are really enlightening:
http://www.digitalimagemagazine.com/blog/featured/tutorial-correcting-lens-distortion-in-your-reference-photos/
A little learning goes a long way when working from a photo. You may not be able to see the underlying skull from a photo of a face, but you cannot deny it exists – so just imagine how much better it would be if you had an understanding of the skeleton under the skin, in order to make the best of an inadequate photo.  Learn about aerial perspective for landscape painting, and THEN study your photos, and notice how inadequate they can frequently be.
Now, I know I am not about to change the world when I say this, but for whatever it is worth, MY philosophy is that if you work directly from photos all of the time, instead of working from life– you are missing out a BIG CHUNK of the experience, and the learning. This, in turn, will affect your ability to use photos properly.
I believe that using photographs EVENTUALLY, once you have spent time developing your drawing, painting and observational skills,  can open up new approaches and ideas – I will go into that in another blog post at a later date.  For now, I just want to encourage those of you who DON’T work from life, to try it, to see how very different it feels, and to discover how much you can learn. Also, I recommend you make a point of learning about photographic distortions so that you begin to recognise, and avoid them.


Both of these practices will help you to use photos more effectively and confidently in the fullness of time.
Posted by jackie simmonds at 00:29