PAINT WHAT YOU REALLY SEE

'The overwhelming tendency is to see what we believe to be there, rather than believing in what we actually see.' (Arthur Maderson)
As a tutor, I used to find, very often, that artists often do paint what they BELIEVE to be there, often denying the evidence of their own eyes.   I can hear my own tutor saying to me  “paint EXACTLY what you see, Jackie”. It took me a long time to realise properly what she meant.
Often, what we see is not what we expect.  In the distance, for example,  there may be a person, or a group of people……but the light at that moment in time might break up the colours into fragments, the shapes barely discernible.  Sometimes, all we actually see is a few dots and dashes of colour.  However…..what do we so often do?  We make it up.  We look down, away from the scene, and make sure that in our painting, the viewer knows exactly what’s what and where.
A classic example is a scene full of houses, a village perhaps on a hillside, with the houses receding into the distance.    Can we actually SEE all the windows in the distant buildings?  Perhaps some of them, but I’d like to bet not all of them...........and yet, I have seen artists laboriously putting in every window because they KNOW they are there.  And they put white window frames around them....because they know they are there.  Yet, the building might be in shadow and the frames hardly visible! 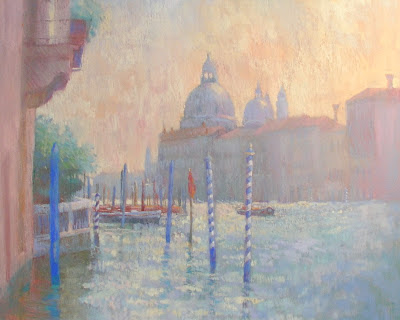 When painting in Venice, I sketched this scene.  Now, I COULD have put in every window on those distant buildings.  I know many an artist who would have done.  But actually, with the light behind the buildings, the windows were hardly discernible.  Putting them in, in this painting, would not have been properly true to what I was really seeing. 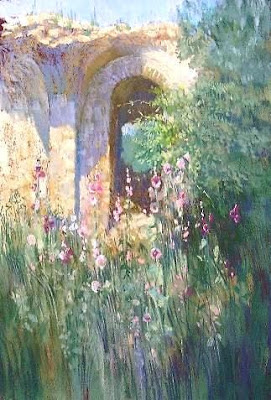 Here are a few more words from Arthur Maderson, one of my favourite present-day painters:


"The overwhelming thrust of advice from many of our finest figurative painters, from Constable to Cezanne, has been to develop skills in seeing PURE VISUAL INFORMATION.  Cezanne said that the painter "must always follow the logic of his eyes.  If he feels accurately, he will think accurately.  Painting is primarily a matter of optics.  the matter of our art lies there, in what our eyes are thinking".


However, we do need to learn all we can about colour, in order to sharpen up our awareness to visual information.  One painter, when looking at a nude, will see small variations within the concept of "flesh colour" whereas Bonnard once said "I see thousands of tiny tints, I have to try and find ones which will live and make the flesh vibrate like that on my canvas". And Monet said "Paint it just as it LOOKS TO YOU, the exact colour and shape until it gives your own naive impression of the scene before you".  If we sharpen up our knowledge of the world of colour, and at the same time, allow ourselves to really see what is before us, instead of just painting what we think "ought" to be there, then, as Arthur Maderson says "once one has perceived nature in terms of delicate stabs of colour, then there is no going back, the world takes on the aspect of crushed jewels. Extraordinary things begin to happen.  The gap between the act of painting and nature ceases to exist.  nature looks like a painting.  Your attention is distracted from what a person is saying because their left ear has turned a transparent orange/red, and viridian hues are detected in a passage of reflected light on their lower jaw.  What was ordinary appears extra-ordinary."


I am still striving to achieve this.......it is not easy, but it certainly is exciting, and much more exciting than laboriously painting in windows because "they were there".


If you would like to see some of Arthur's works do click here:
The works of Arthur Maderson


Hus work appeared in  'International Artist' where he was one of only eight European artists featured in 'Modern Master Painters of the World'.