The Truth of Clouds

THE TRUTH OF CLOUDS
Some time ago, I found an old copy of a book called “Modern Painters” by John Ruskin (1819-1900).  It is so old, it was printed before the introduction of ISBN numbers and it does not even have a date in it.  However, it does have some wonderful “words of wisdom” which I would like to share with you.
He discusses all aspects of clouds.  He looks at the symmetry and variety of clouds, the sharpness of edge, their multitudes, and their purity of colour.  I will break some of these down in the coming weeks, but for now, I will repeat some of his more acid comments about the works of the Masters, which amused me no end and I hope will amuse you too.  He said:
“The Dutch Masters look at clouds as at everything else which did not particularly help them in their great end of deception, with utter carelessness and bluntness of feeling;  saw that there were a great many rounded passages in them, AND FOUND IT MUCH EASIER TO SWEEP CIRCLES THAN TO DESIGN BEAUTIES, and sat down in their studies, contented with perpetual repetitions of the same spherical conceptions, having about the same relation to the clouds of nature, that a child’s carving of a turnip has to the head of the Apollo”.
“Especially characteristic of the central region (of the sky) is a white, ragged cloud which has little form and less colour…when this vapour collects into masses, it is partially rounded, clumsy, and ponderous as if it would tumble out of the sky, shaded with dull grey and totally devoid of any appearance of energy or motion.  These beyond all others are the favourite clouds of the Dutch masters.  A little flake white, glazed with a light brush over the carefully toned blue, permitted to fall into whatever forms chance might determine, edges tolerably irregular – a sky quite good enough for all ordinary purposes, for cattle to graze under, or boors to play ninepins under – and equally devoid of all that could gratify, inform or offend.”
“Take the ropy, tough-looking wreath in the Sacrifice of Isaac, and find one part of it, if you can, which is not the repetition of every part of it, all together being as round and vapid as the brush could drawn them”
“take the Nicholas Pousin, No. 212 in the Dulwich Gallery, in which from the brown trees to the right-hand side of the picture, there is not one line which is not physically impossible”
“perhaps the most grievous fault of all, in the clouds of these painters, is the utter want of transparency.  Nothing can be more painfully and ponderously opaque than the clouds of the old masters universally.  The light is always ON them, not IN them.  And this effect is much increased by the positive and persevering determination on the part of their outlines not to be broken in upon, nor interfered with in the slightest degree, by any presumptuous blue, or impertinent winds.  There is no inequality, no variation, no losing or disguising of line, no melting into nothingness nor shattering into spray;  edge succeeds edge with imperturbable equanimity and nothing short of the most decided interference on the part of tree-tops, or the edge of the picture, prevents us from being able to follow them all the way round, like the coast of an island”.
I loved that last sentence. And also the idea of “impertinent winds”.   What a way the man had with words, and how damning he is!  I am rather glad he is no longer alive, and able to criticise MY clouds! 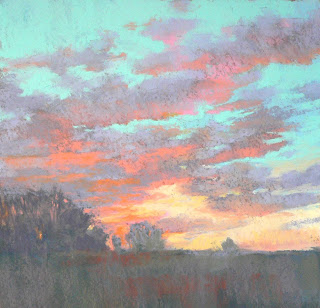 Posted by jackie simmonds at 10:49