Recently, while helping an artist in an on-line forum, I became conscious how useful MY days as a student had been, when we students had a drawing tutor who was very “old school”.  He believed in teaching the basic principles of drawing………unlike many of his contemporaries who were from the “art is on the streets, go find it” school of thought.  They laughed at my tutor’s old-fashioned ideas.
Well, I pay homage to that "old-fashioned" tutor each and every day.  If I can draw at all today, it is because of him.  One of the principles he taught me, I still use, in every drawing I do from life.  That is, the use of a MENTAL GRID.
In fact, he taught us this skill with the use of a real grid.  Our life model would sit in front of a large back-drop, like a piece of stage scenery.  Pinned to that back-drop, or wall, was a massive white board………with a grid painted on it.   We had to create a similar grid on our paper, to the same proportions.  Then, we had to draw the model, ensuring that every part of the model “lined up” with the grid on our paper, in the same way that the model, in real life, “lined up” with the grid on the wall.  Bit like this: 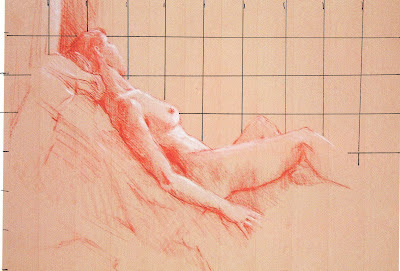 It was not too difficult to get the top of the body well positioned.......but then, what about the places where the body "hid" the lines?
We would then have to mentally "throw the line" down, and across, to make sure that everything lined up correctly.  Like this...the dotted lines represent extensions of the grid behind the model: 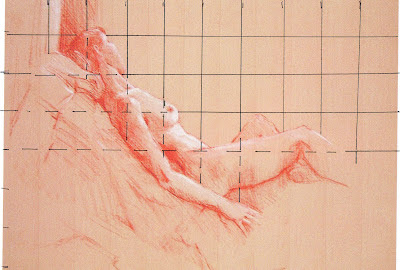 Many other "positions" can be fixed in this way.
Also, the grid gives particularly good "negative shapes" which can also be a good thing to check, when aiming for accuracy: 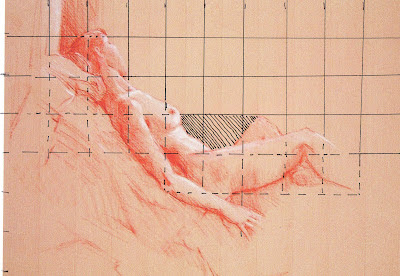 I have added a few extra "mental lines" here....in particular, I was interested to see how the lines intersected on the point of her elbow, and where they extended to and what they met.
Now I can hear some of you saying……….”but this is the same as drawing a grid on a photo”.  Well, actually, it is NOT really the same.
A photograph is a flat, two-dimensional piece of paper.  The image on the photo is actually flat.  If you draw a grid on the photo, you can see the lines of the grid and under those lines, the shapes in the image.  It is then fairly easy to transfer the contents of each square, to a bigger sheet of paper.  This will train your eye to a certain extent, but not in quite the same way as working with real objects, which are three-dimensional.  And although you might be able to physically put a grid up behind a still life, you cannot easily put a grid behind a life model in a class situation, or behind a landscape!
Starting with a grid behind a still life, is in fact a useful exercise.  Because,  being unable to see all the lines means you then start to SCAN ACROSS to pick up the line where it reappears….and then you begin to SCAN UP AND DOWN to do the same thing.
This is the start of HAVING NO GRID.  The goal must be that eventually, you no longer need the grid at all……you learn to scan across, and up and down, with every subject, to check for accurate placement.  With practice, you will not need an actual rigidly constructed "grid" as such….you can place your mental lines wherever you wish, and then double-check your drawing.
Here is a still life, painted from life.  the lines drawn on the top of the painting show my thought processes as I CHECKED the placement of the objects: 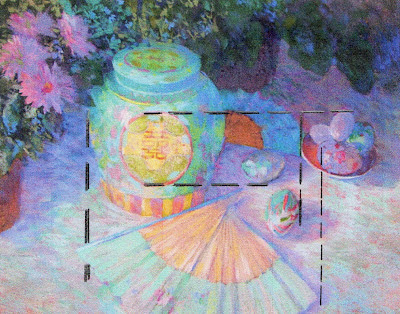 This is SO much better than simply following outlines.  Someone I was trying to help recently in an on-line forum, had copied the outlines in a photograph, and had gone totally wrong.  If he had used the mental grid method, he would have seen, immediately, as I did, where he had gone wrong.  His proportions would have been better, and measurements generally would have been improved.
If you make a point of regularly “throwing” a mental plumb-line down from one part of a scene to another, and other lines across the scene too, you will gradually begin to do this as second nature, no matter what the subject might be.  Try it when you look out of your window.  You can use something straight to look "along" or "up and down" - a pencil, a stick, a ruler.  Anything will do.  Training yourself to look in this way will pay HUGE dividends, I promise you!
Posted by jackie simmonds at 08:01