THE WONDER OF THE DRAGONFLY 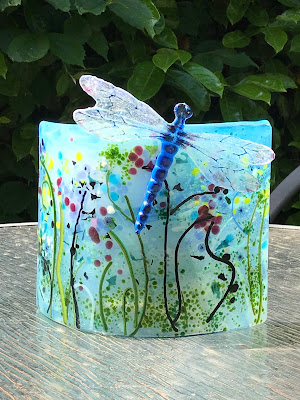 Mosquitoes bite you, leaving horrible itchy red welts. Bees and wasps sting. Flies are just disgusting. But there’s something magical about dragonflies.
Dragonflies were some of the first winged insects to evolve, some 300 million years ago.
Modern dragonflies have wingspans of only two to five inches, but fossil dragonflies have been found with wingspans of up to two feet. Some scientists theorize that high oxygen levels during the Paleozoic era allowed dragonflies to grow to monster size.
There are more than 5,000 known species of dragonflies, all of which (along with damselflies) belong to the order Odonata, which means “toothed one” in Greek and refers to the dragonfly’s serrated teeth. (serrated teeth?  who knew?)
In their larval stage, which can last up to two years, dragonflies are aquatic and eat just about anything—tadpoles, mosquitoes, fish, other insect larvae and even each other! At the end of its larval stage, the dragonfly crawls out of the water, then its exoskeleton cracks open and releases the insect’s abdomen, which had been packed in like a telescope. Its four wings come out, and they dry and harden over the next several hours to days.
Dragonflies are expert fliers. They can fly straight up and down, hover like a helicopter and even mate mid-air. If they can’t fly, they’ll starve because they only eat prey they catch while flying. Dragonflies catch their insect prey by grabbing it with their feet. They’re so efficient in their hunting that, in one Harvard University study, the dragonflies caught 90 to 95 percent of the prey released into their enclosure.
The flight of the dragonfly is so special that it has inspired engineers who now make robots that fly like dragonflies.
Some adult dragonflies live for only a few weeks while others live up to a year.
Nearly all of the dragonfly’s head is eye, so they have incredible vision that encompasses almost every angle except right behind them. Dragonflies, which eat insects as adults, are a great control on the mosquito population. A single dragonfly can eat 30 to hundreds of mosquitoes per day.
I have a pond in my garden, and I love to watch the dragonflies as they dart over the pond and settle on the lilypads. And now, I make dragonflies, 5"x7", in glass.......immortalising them for ever. Since my heart surgery and difficult recovery from a stroke, I appreciate their symbolism - the dragonfly is a symbol of change, transformation and self-realization. It teaches us to love life, to rejoice and have faith even amidst difficulties.
They are popular and don't stay with me for long (the green one below is sold), but occasionally I put my dragonflies into my Etsy shop, if you would like one too.  ETSY SHOP 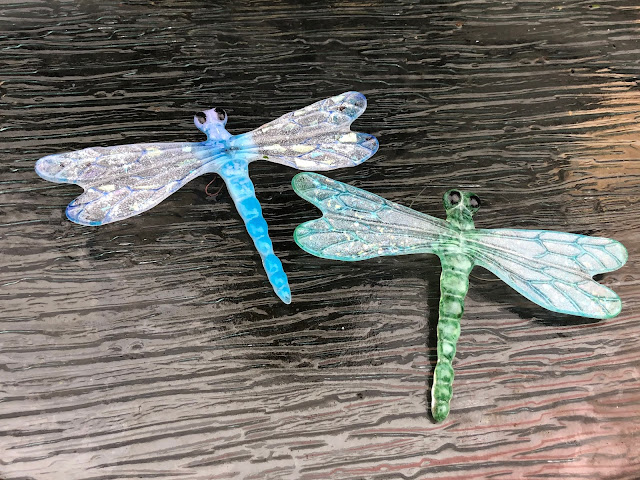 Posted by jackie simmonds at 01:30