OWLS INSTEAD OF PESTICIDES

A while ago, I visited Israel and had the pleasure of meeting Professor Yossi Leshem, who is involved in  something called The Atlas Project, which brings together Israelis, Palestinians and Jordanians.  Traditionally, Arab farmers felt that owls brought bad luck, but in fact, thanks to Yossi's efforts, owls are now being used instead of pesticides, to control rodents in the fields.  Farmers now love the owls, and this film shows the project in action:  Just click on the link to watch the short presentation:
owls instead of pesticides
In this part of the world, where tensions are often high and bad news from the region is all too common, it is a joy to see Arabs and Israelis working together in this way.
I have always liked owls;  as an art student, I drew lots of them, in London Zoo, and in the museum in Tring.  I was able to touch and hold one of these fabulous Israeli baby Barn owls, which sat happily on my hand and allowed me to stroke its soft head - a wonderful experience.
More recently, I found a supplier selling the cutest tiny  "millifiore" owls - small pieces of glass which can be included in fused pieces.  I bought a few and have included owls in two pieces of glass art.  Obviously the photos are much smaller than the pieces themselves, so the little owls are hard to find, but you can see them in the detail pictures. 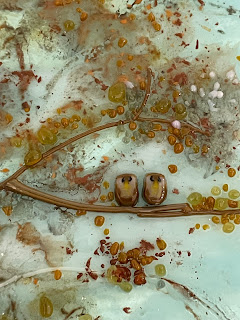 and a sculptural piece: 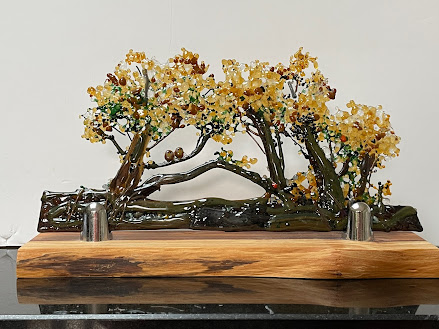 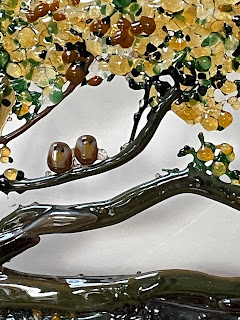 I love these little cuties, and because they are so small and will only really be spotted by someone eagle-eyed, I think I got away with it in that they don 't look too twee, always a problem when adding little creatures to pieces of art.
I think they are fun.
Posted by jackie simmonds at 14:41